Troop 403 is currently accepting applications for the up coming scout year. We will be hosting a scout open house on 9/17/2016 from 9:30 AM – 5:00 PM to introduce boys the the great opportunities that scouting provides. We will have stations that demonstrate fire building, STEM topics, knots, orienteering and other scout skills RSVP now

Keep in touch!  Visit the troop calendar to learn more about the exciting events scheduled for the rest of the Scout year.  Here are some key dates this month:

END_OF_DOCUMENT_TOKEN_TO_BE_REPLACED

We had a great “Golden  Gherkin” cooking competition this last weekend.  The Scouts did a great job preparing meals on time and with great presentation. We dined on mountain man, roasted apple bowls, homemade guacamole, fried chicken and pulled pork with homemade barbecue sauce   Thanks for all the cooperation, creativity and competition, the judges were well fed and really appreciated the effort. 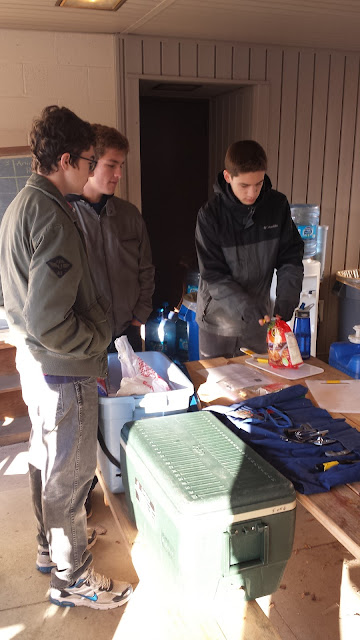 Alumni of Troop 403 came together for the first time since 1992 to celebrate 100 young men attaining the rank of Eagle Scout. This was a rarity for the strong Scouting movement in Bowie.
Planning began in 2012 when the Boy Scouts of America was celebrating the 100th anniversary of the Eagle Scout. Troop leaders discovered their Eagle count was creeping ever closer to that magic number of 100.
With notebook in hand, Troop 403 leaders started tracking down the 100 Eagle Scouts. Most had left Bowie — two were in Canada and Austria. Eventually, they found 85. About 50 were able to attend the July 27 reunion at Whitemarsh Park in Bowie.

Each was asked for information on what they are doing now, their best memories of Troop 403 and advice to Scouts following in their big footprints. It was surprising how their fundamental messages ring out, not only for the Scouts but for society itself.

Probably one of the proudest Scouts was Len Lucchi, a resident of Bowie for more than 50 years. He was the troop’s fifth Eagle, and father of Eagle Scout No. 77 Michael Lucchi.

“Now, more than ever, there are considerable time demands on young men — sports, family and academics. You might not always be able to give Scouting the time that you want or that it needs, but stick to it, you can always reinvigorate your participation. And years later, you will be glad that you did,” he said.

These are wise and experienced men, but the youth of today had wise words as well.

David Hoke, Eagle No. 94 and a student at University of Maryland, urged Scouts to do their best to learn all they can about cooking, cleaning, survival, first aid and camping.

“Scouting is great for learning to work with other people,” he said. “Everyone in your patrol is different, and learning to work along with those people will prepare you for the rest of your life.”

It is not possible to get more basic than that. Who wouldn’t want one of these men working for a business that ran an organization, designed and executed a service project as a youth that some persons would not dare undertake as an adult? It takes a special person to become an Eagle Scout. Troop 403 has a lot of them.

Just four days prior to the reunion, Troop 403 Scout Blake Powell sat before six distinguished adults from Bowie. Each asked him a set of questions, and each received an answer that was suitable and, in some cases, remarkable.

After it was all done, Blake was honored with becoming Troop 403’s 100th Eagle Scout. This young man will go far.

Eagle Scout is the highest rank a Boy Scout can achieve, and all requirements must be completed before the Scout reaches age 18. Although the requirements are somewhat different now than they were in the past, they are basically the same.

A Scout must earn 21 merit badges, 11 of which are required. The rest can be the Scout’s choosing from over 100 different merit badges that are offered. They must hold different leadership positions throughout the ranks of advancement, and plan and execute a service project to benefit the community.

Of any 100 boys who become Scouts, almost all will credit Scouting for introducing them to some lifetime hobby or interest. Only two in a 100 can be expected to become Eagle Scouts, but one in four Eagle Scouts will say that the rank exceeds his college diploma in value.

Troop 403 has had over 400 young men participate in the Scouting program during the 47 years that it has been in Bowie, producing 100 Eagle Scouts. That is a 25 percent success rate compared to the national 2 percent rate. Troop 403 has another five young men in the pipeline waiting to receive their own “Eagle Charge.”

Bowie City Councilwoman Diane Polangin found the right words for the moment: “Scout leaders, it is with much pride and satisfaction that I congratulate you on your dedication, hard work and perseverance and for the honor of helping 100 young men achieve the rank of Eagle Scout!”

Roger Brow is the assistant Scoutmaster of Troop 403. Contact him at rbrow@alionscience.com.